EIGHTEEN// Born to a Ghanian father and Scottish mother, bi-racial triplets Afia, Naki, and Kwame Osei grew up in the border town of Windsor, Ontario. The Osei's decide that it's time for a change of pace as their kids are about to enter adolescence, and head east to Toronto. Adjusting to big city life in Toronto proves to be challenging at first, but Afria, Naki, and Kwame band together as usual, and form a group of friends that help take their minds off the life they left behind in Windsor. Through first-person accounts, the triplets each share their new friendships, entry into dating, transitioning into high school, the trips, the parties, and the adventures that go along the way as they come of age in the 90s.

FRIENDS WITH BENEFITS// Symone hasn’t been in a relationship since high school, and now that she’s finishing up college, she realizes that she has a fear of commitment that is difficult to overcome. Rather than settling down with one man, Symone decides to openly divide her affection between soft-spoken Jeremy, one of her oldest friends, Richard the suburban athlete, and Darnell the west-end thug. While the arrangement works well for Symone, her man friends soon begin to question her choices, jealousy surfaces, and her fear of being alone starts to cause a strain on her career development as an actress. Symone is forced to make difficult choices before she sabotages everything--and everyone--she loves.

CARNIVAL SPOTLIGHT// ​Toronto's former reggae dancehall princess, Delia Chinn, is drawn back into a seductive party lifestyle when she meets Jessica & Victor, members of the "Groovy Massive" soca dance group. Although Delia's self-esteem is on the rise, it's at the expense of her relationship with Ryan and their five year marriage...a marriage that may not survive her first carnival season.

FIRST YEAR// High school sweethearts, Michelle and Austin, leave Toronto to begin university at a popular party school in Windsor. Being away from home for the first time proves to be a challenge, and they must learn to balance their educational goals and relationship issues, as well as establish their independence from their families. While Austin is a natural student and quickly adjusts to his new life and routine in Windsor, Michelle has a hard time keeping up with her classes and getting used to Austin’s changing attitude and new habits. When tragedy strikes, they are forced to take time to make sense of the lessons encountered and their next steps into adulthood.

REQUEST TO REWIND// Abigail, a twenty-seven year old photographer, is in a never ending rut. She spends her time tolerating a job at the mall, enduring pressure from her parents to establish a traditional career, and relying on her older brother Leighton and her best friend Kiziah to help keep her sane. When Abigail meets Toronto’s top nightclub promoter, Karl “Karisma” Marshall, she quickly falls for his charm and is soon introduced to the introspective DJ Rewind and an entirely new world of drama, music, and social unrest. Thrown into an unexpected love triangle, Abigail sees a new side of Toronto, and has the opportunity to raise community awareness and her personal profile through her photos.

THE HOOK UP// They look. They like. They meet. They hook up. Four short stories explore new relationships for couples in their early twenties. In “I Met Her At A Basement Party,” Khabili spends a long summer working, playing dominoes, and listening to his boy school him on how to find and manipulate women. In “Electric Backslide,” newlyweds Rodney and Desiree deal with their social and spiritual differences. Rayne takes a road trip to Toronto from Hamilton to distract herself from a recent breakup in “Show Time,” and in “The Path” Lisa dates a charming single father, Trevor, and attempts to tolerate the many disruptions from his son’s mother.

Purchase our novels and story collections!

(1) Click on the book cover image to connect to our secure paperback ordering service;

(2) Send an email with your local request (for delivery or pickup in Toronto) to services@kyapublishing.com.

THE WAY WE USED TO BE// Eleven short stories explore the lives and challenges of high school students across the Greater Toronto Area in the late 90’s: “Babymoms” (dawn gets pregnant at seventeen), “Bad Man” (Lucas fights to save his reputation), “Drink With Me” (Mina experiments with drugs), “Girlfriend” (Latisha’s new man tests her character), “I Got It Like That” (Trish ends her promiscuity), “No Regret” (Sara tests her loyalty to Marcus), “Rahim” (Bria fears her boyfriend’s new associates), “Run Away” (Perrine’s first relationship), “The Ex” (Malene’s possessive ex causes an annoyance), “Tie The Knot,” (Shanita cheats on her boyfriend), and “Tru Playa” (Garfield entices an older woman). 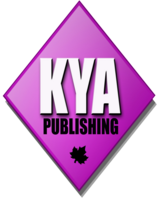 I WISH I NEVER MET HIM// Thirty-one year old Renee, a graphic designer and dedicated athlete, takes a week long vacation to Cancun with her wild cousin Vanessa, to sort out her thoughts about her new relationship. While Vanessa takes the opportunity to meet new women and enjoy the sun, Renee spends her time reflecting about the past and trying to make sense of the role she has played with her former boyfriends. Although Sheldon is a kind-hearted and supportive man, Renee doesn’t know how to move on from her past hurt and mistrust, and accept the goodness that is right in front of her. Insecurity and doubt cause Renee to jeopardize her vacation, and put her future with Sheldon at risk.

VIDEO LIGHT// Ryan Wright, a humble 29-year-old Scarborough high school teacher finally has an opportunity to connect with Toronto’s dancehall princess--his long-time crush, the beautiful Delia Chinn--after a Carnival Sunday party. Despite the doubts of their friends and families, the unlikely couple are determined to make their new relationship work, and reconcile their differences in upbringing, values, and lifestyles. Ryan was raised by academic Jamaican parents; Delia has raised herself as a result of a broken home, and the loss of her grandmother. As they attempt to establish a stable relationship, they learn about themselves, their needs, their flaws, and what it takes to truly support one another.